The autumn selling season is a big one for the San Francisco luxury homes market: There is usually a very significant spike in activity between Labor Day and the beginning of the mid-winter slowdown in mid-November. It will be a couple months before we begin to get definitive statistics on listing and sales activity in September and October, but in the meantime we can review the market conditions and trends as they have developed over recent years. This report will pay particular attention to the different neighborhood markets within SF.

We usually use $1,850,000 as the price threshold for the luxury condo, co-op and TIC market in San Francisco: That approximately defines the top 10% of the market. The ultra-luxury segment starts at $3 million, which constitutes the top 2.5% of sales. Of course, what one gets in the different neighborhoods for the same price can vary dramatically: The city has an enormous range in locations, architectural styles, views and amenities.

All our Paragon reports can be found here 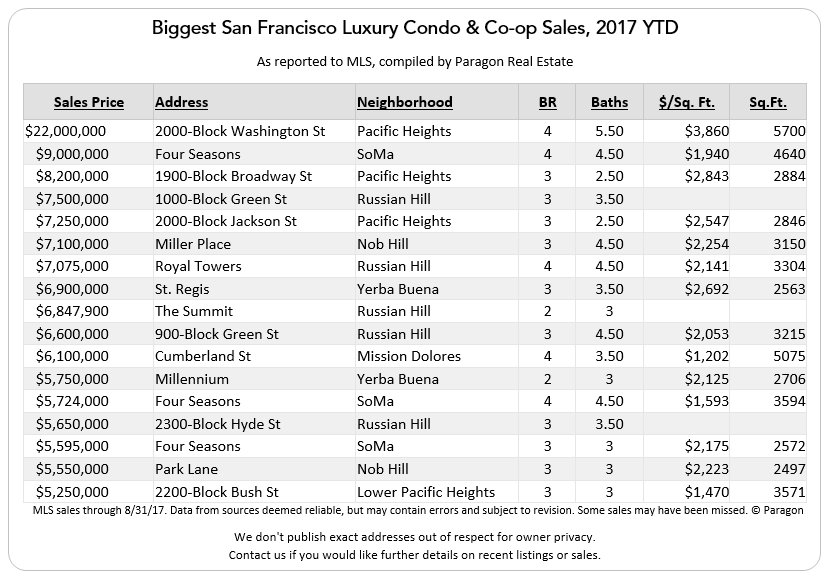 As of mid-month, 49 new luxury condo, co-op and TIC listings have come on the SF market since the beginning of September, so it looks like it may be a record-breaking month for new listing activity. 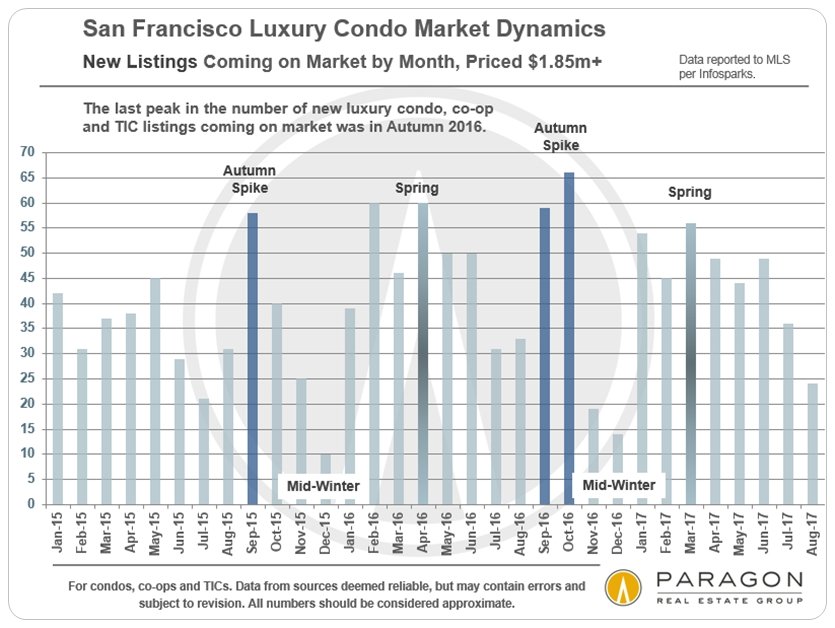 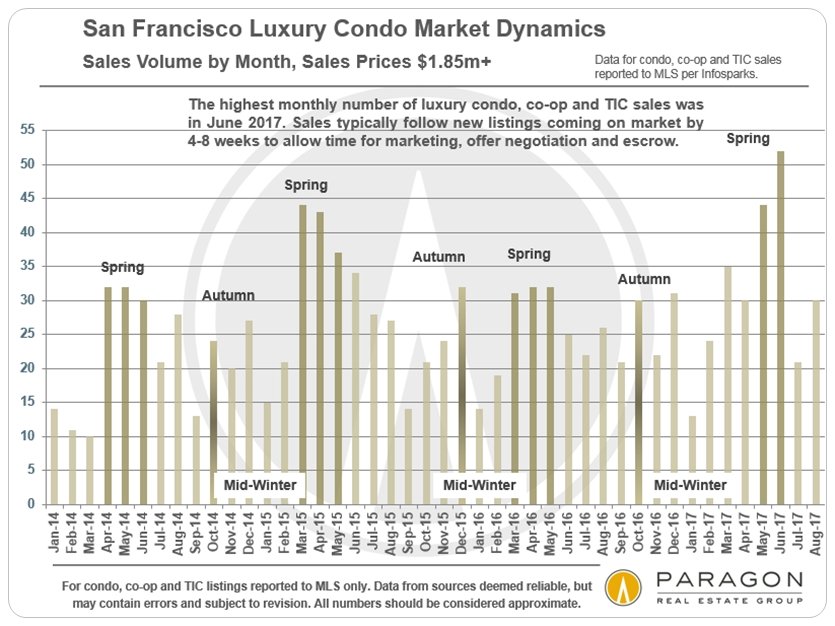 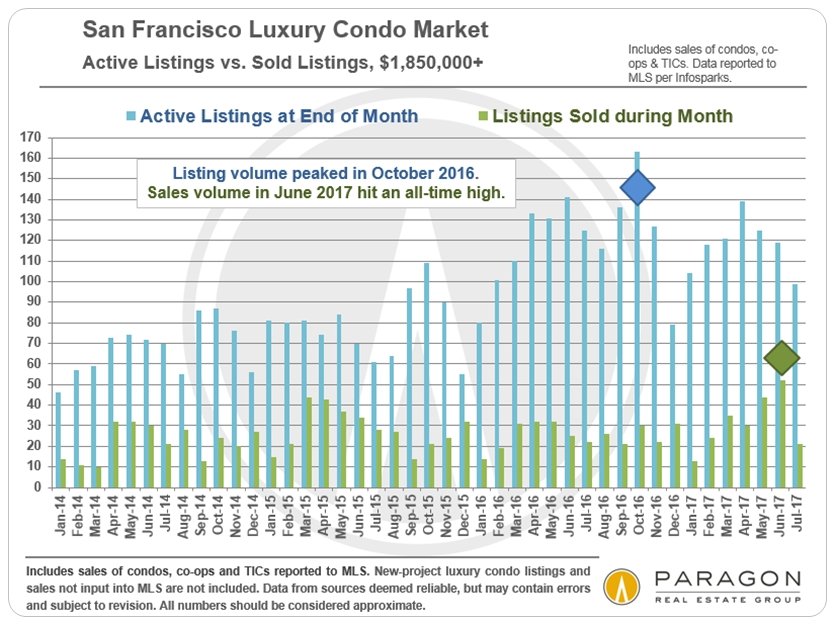 If you wish, you may skip our summary and jump to additional graphed analyses further below.

The luxury real estate market is impacted by a number of factors: positively, by improvement in general economic conditions and confidence, highly-paid employment and population growth, foreign buyers, and especially, by the creation of new wealth in large quantities. All these elements were dynamically present in the Bay Area from 2012 through mid-2015. Then significant economic and political volatility put a damper on the market: Chinese stock market turmoil, the crash in oil prices, Brexit, the U.S. presidential election, as well as an apparent cooling in our high-tech boom, all injected uncertainty into financial markets and our local luxury real estate market from late summer 2015 to late autumn 2016. Furthermore, Bay Area high-tech IPOs, which had created a stupendous amount of new wealth since 2011, basically dried up during this period – and newly rich or substantially enrichened buyers had played a big role in demand.

Generally speaking, most affected was the market for re-sale luxury condos, particularly in those neighborhoods where big, new-construction projects are concentrated and dramatically increasing supply. It is hard to get definitive data on new-project sales activity, but it is believed to have softened as well with the overall jump in listings, all competing for the same buyers.

The biggest shift in the luxury condo market has been the dramatic year-over-year drop in sales reported to MLS in the greater South Beach-SoMa district, even as listing inventory there has hit new highs. As illustrated below, by virtually every market indicator – months supply of inventory, average days on market, and others – it is the softest luxury condo market in the city. This is the area where many big, new projects continue to come on market, and, to some degree, they are probably cannibalizing MLS sales as they aggressively compete with the resale market. This is also the district where the unfortunate issues at the Millennium Tower (slight sinking and tilting; multiple lawsuits) are being extensively reported upon. On the other hand, the high-end condos that do sell in this district still often achieve the highest dollar per square foot values in the city.

The Pacific Heights-Marina district and the Noe, Eureka (Castro) & Cole Valleys district have much stronger supply and demand statistics in their high-end condo markets, with the greater Russian & Nob Hills district a bit cooler. 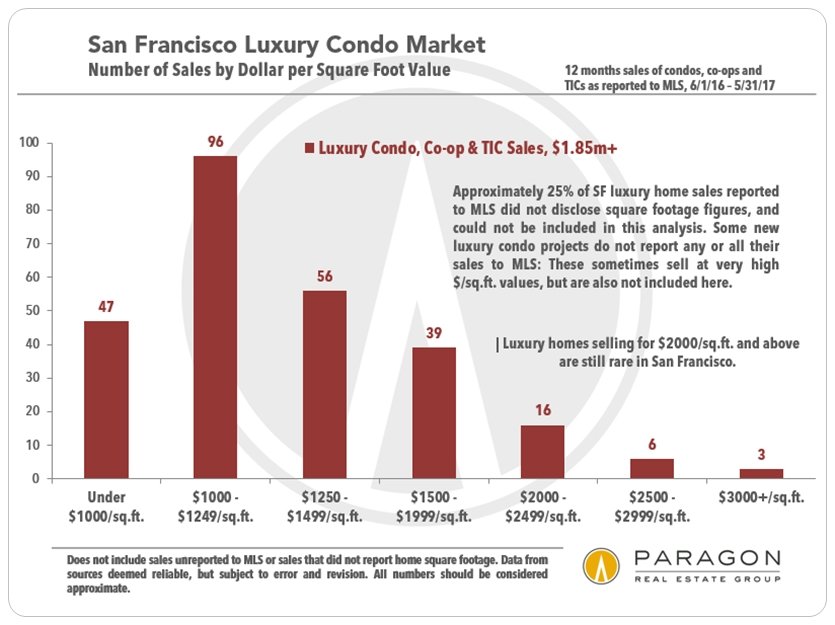 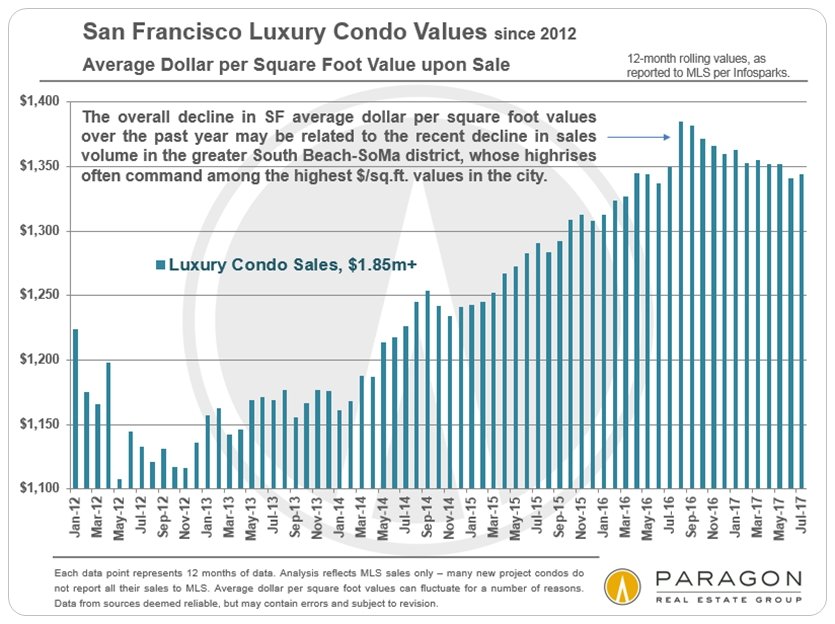 Each of these buildings had 7 to 23 sales during the period measured. 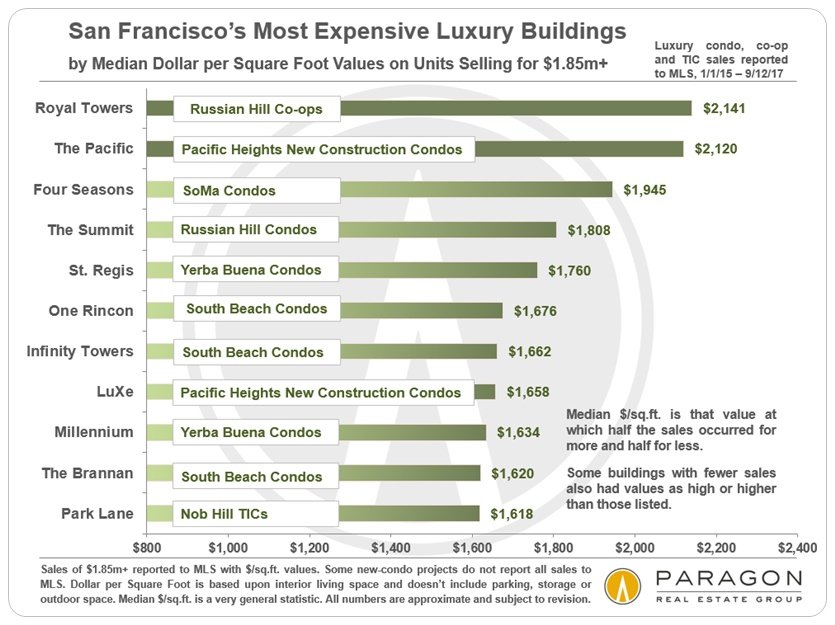 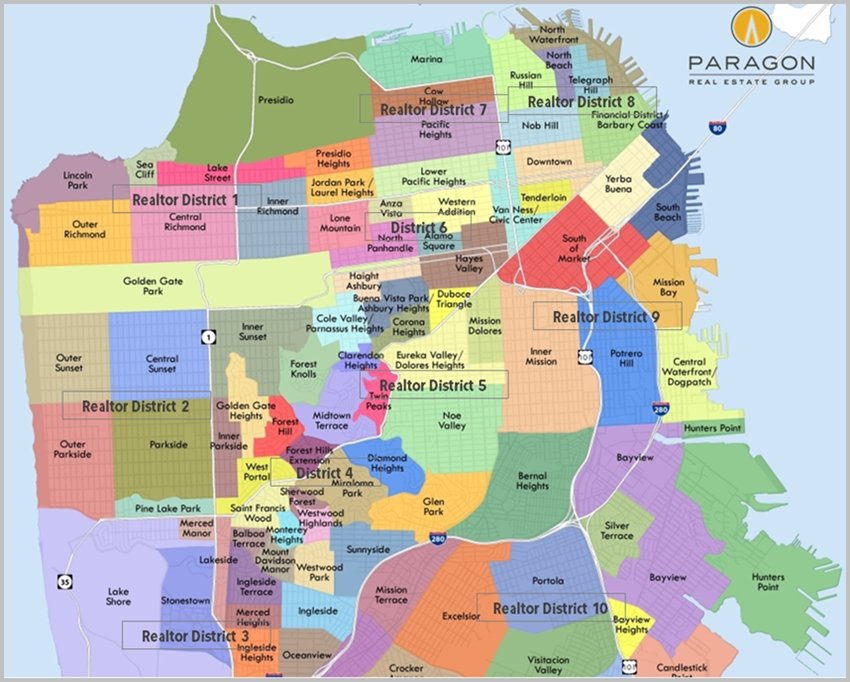 Each Realtor district delineated on the map above and the charts below contains a number of neighborhoods. For example, Realtor District 9 contains South Beach, SoMa, Mission Bay, Yerba Buena, Potrero Hill and the Mission (as far as luxury condo sales go). Sometimes the chart legends will mention different neighborhoods within the district, but it is always referencing the same District 9. 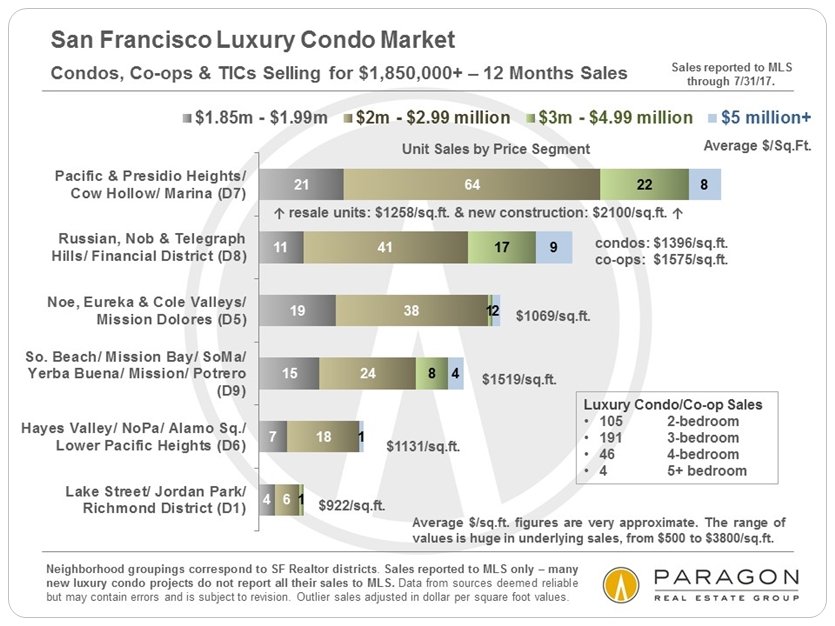 The highest luxury dollar per square foot values are achieved in the greater South Beach-SoMa district – almost all high-rises built within the last 20 years or so – and in the swath of much older, high-prestige neighborhoods, such as Pacific Heights and Russian Hill, running across the northern side of the city. 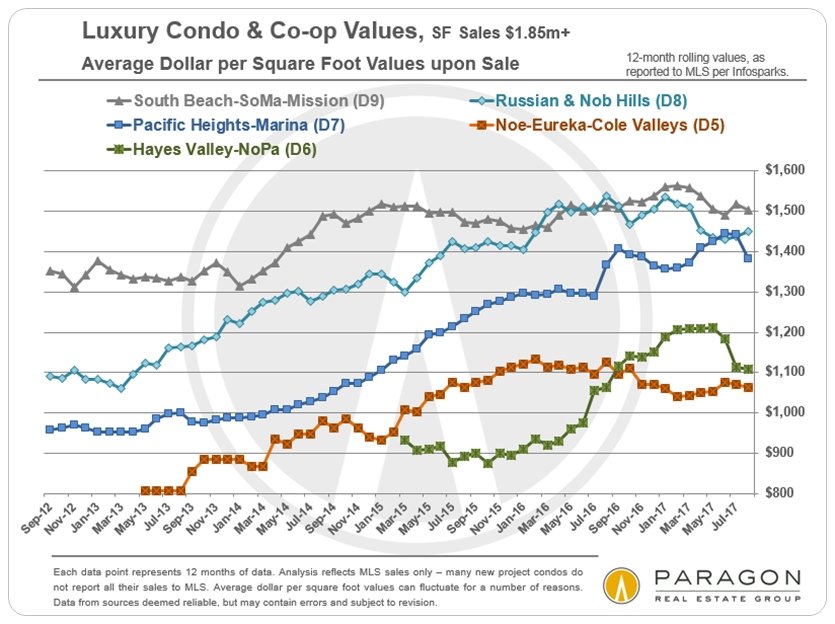 The South Beach-SoMa district has by far the highest number of active luxury condo listings, and that does not include most of the new-project listings, which are typically not entered into MLS. So supply, or over-supply, is a major issue there in the market dynamic. 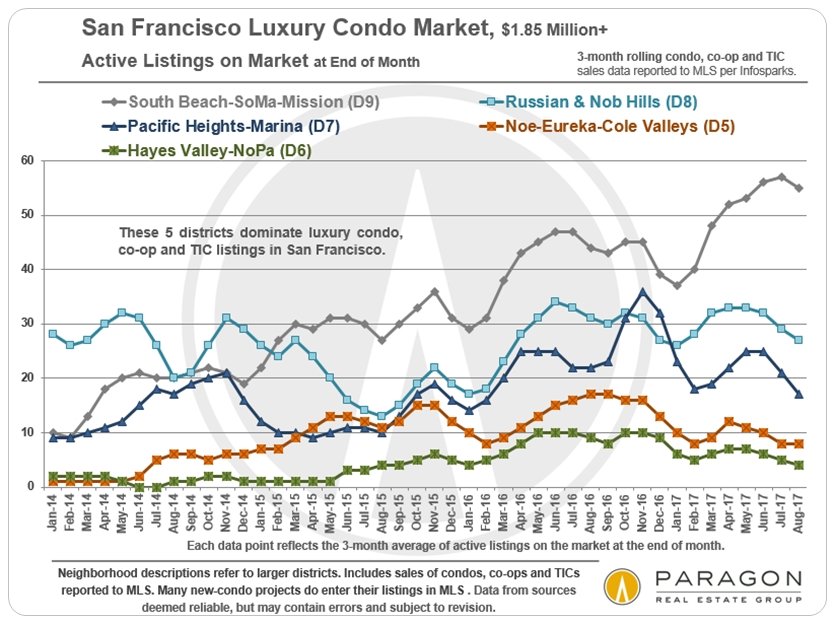 This next chart illustrates the abrupt plunge in sales over the past 15 months in South Beach-SoMa (tying neatly into when the Millennium problems started getting press coverage). The Pacific Heights-Marina district is now the top district for sales, followed by the Russian & Nob Hills area. Sales in the two relative “upstarts” in the luxury condo market – the Noe, Eureka and Cole Valleys district and the Hayes Valley-NoPa-Alama Square district – have been significantly growing in recent years. 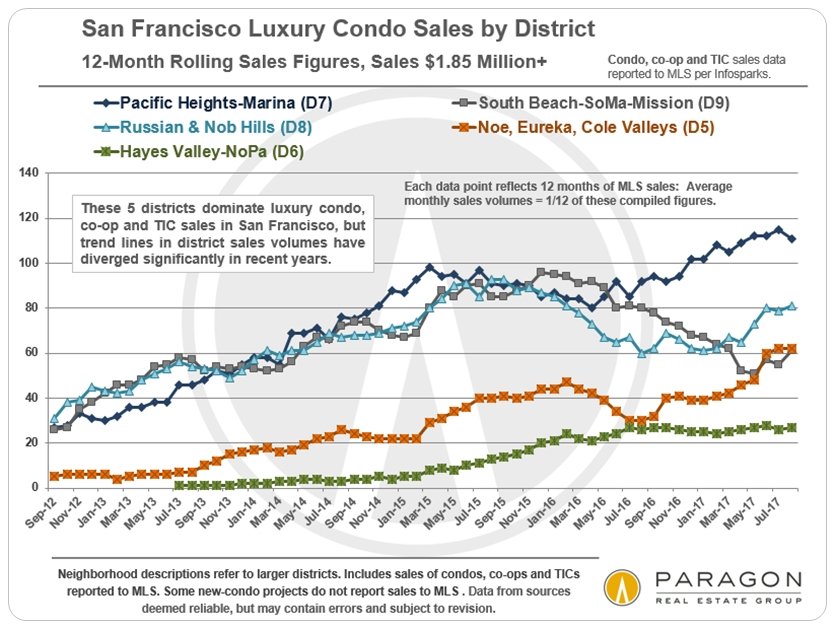 South Beach-SoMa now has aÂ very highÂ months supply of inventory, while Pacific Heights-Marina and Noe, Eureka and Cole Valleys have very low MSI figures. Russian and Nob Hills have somewhat higher but still relatively low MSI figures in recent months. The lower the MSI, the stronger the demand as compared to the supply of listings available to purchase.

High MSI in South Beach-SoMa does not imply that luxury condos are not selling there, but it does mean that listings generally have to stand out as good values, i.e. priced correctly as well as prepared and marketed properly, to seize the attention of buyers confronted with so many options. 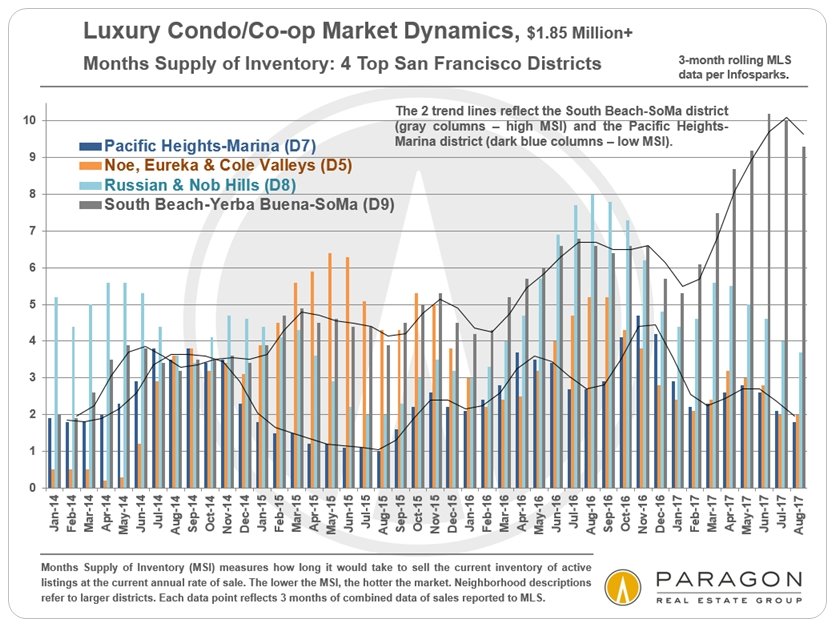 The same dynamic seen in months supply of inventory is replicated in the statistic average-days-on-market. Indeed, the dynamic is consistently illustrated, to a greater or lesser degree, in all the following charts. 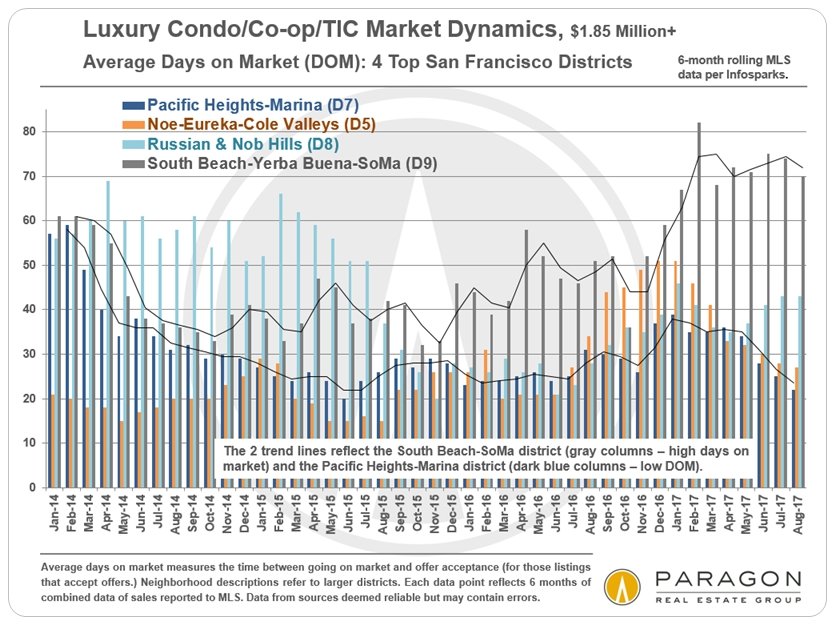 Top Luxury Condo Districts: % of Sales Accepting Offers within 30 Days
The higher the percentage, the stronger the market. 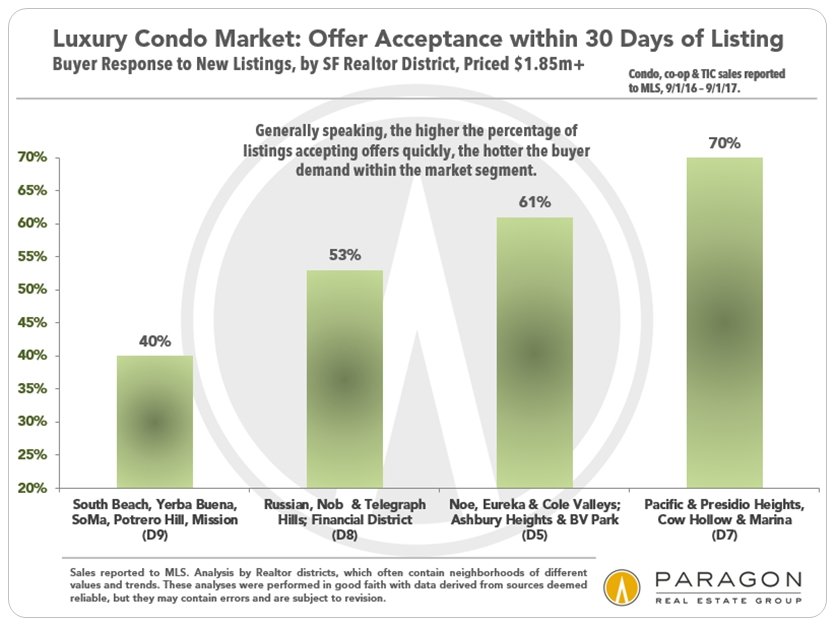 Top Luxury Condo Districts: % of Sales Selling over List Price
The higher the percentage, the stronger the market. 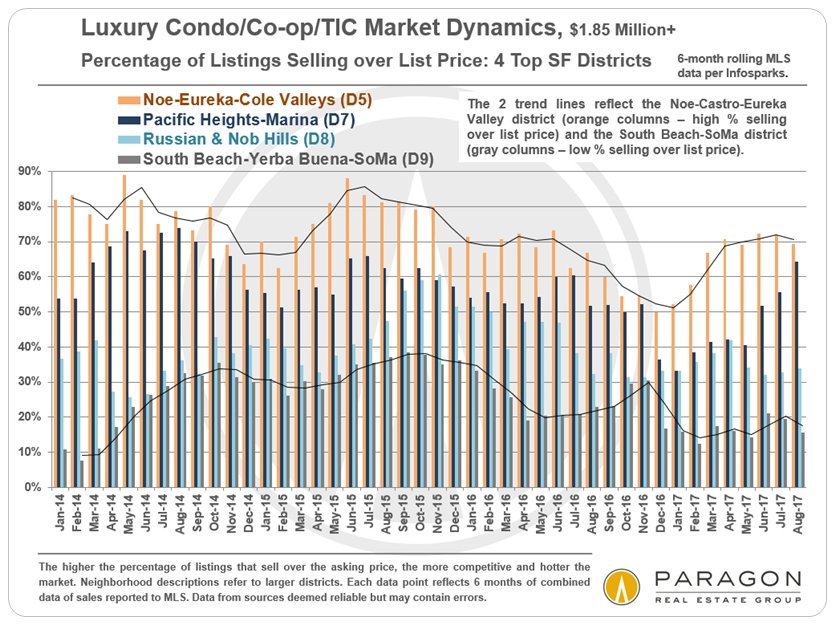 Generally speaking, the higher the overbidding percentage, the more buyers are competing to win listings. However, it is also not unusual in recent years for lower priced areas to have higher overbidding percentages, and the Noe, Eureka and Cole Valleys district is distinctly less expensive than the other 3 districts illustrated on the chart below. 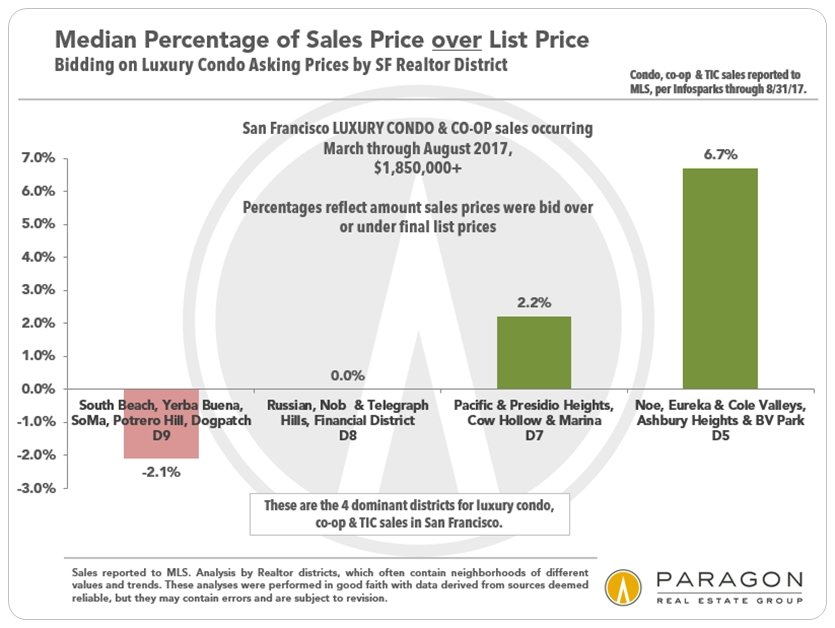 Top Luxury Condo Districts: Listings Taken Off Market without Selling
The higher the number, in relation to overall district
listing and sales numbers, the softer the market. 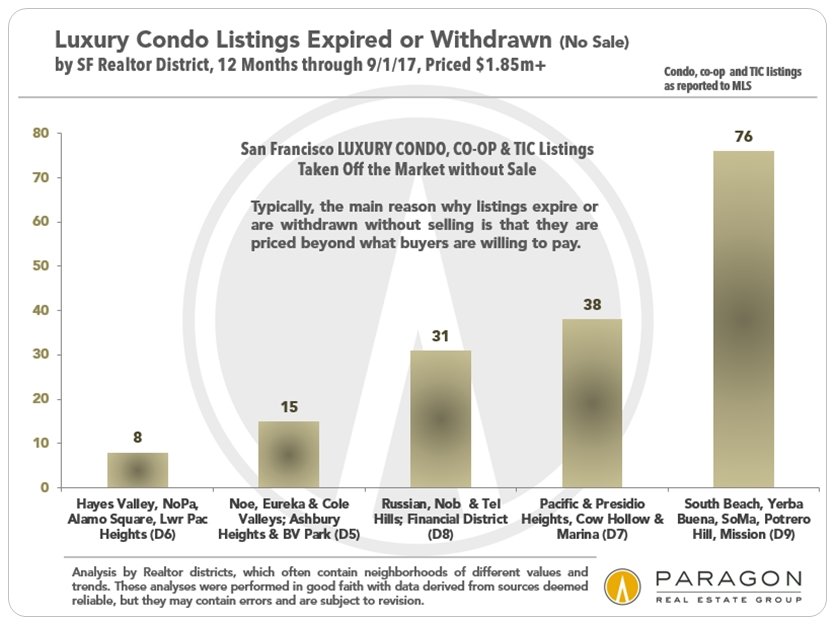 As illustrated in the second chart below, sales at the highest end of the luxury condo and co-op market peaked in spring 2015, while the number of active MLS listings have continued to rapidly climb to peak this past June, so the supply and demand dynamics in this segment have changed considerably in the past 2+ years. This ties in with the financial market turmoil and plunge in local IPO activity that began in late summer 2015. At the same time, some of the recently built as well as upcoming condo projects are aggressively targeting this very expensive niche, adding further to supply.

This market segment targets a very small pool of very affluent buyers and it is not unusual that its statistics for months supply of inventory and average days on market to be appreciably above those in the general market. However, since spring 2015, both metrics have climbedÂ muchÂ higher, to an average of 8.5 months of inventory and an average 55 days on market over the past year. This market has been clearly and significantly tilting to the advantage of buyers.

As seen earlier in the list of biggest sales and the chart showing the most expensive buildings, the ultra-luxury segment is totally dominated by neighborhoods such as Pacific Heights, Russian Hill, Nob Hill and South Beach-SoMa. 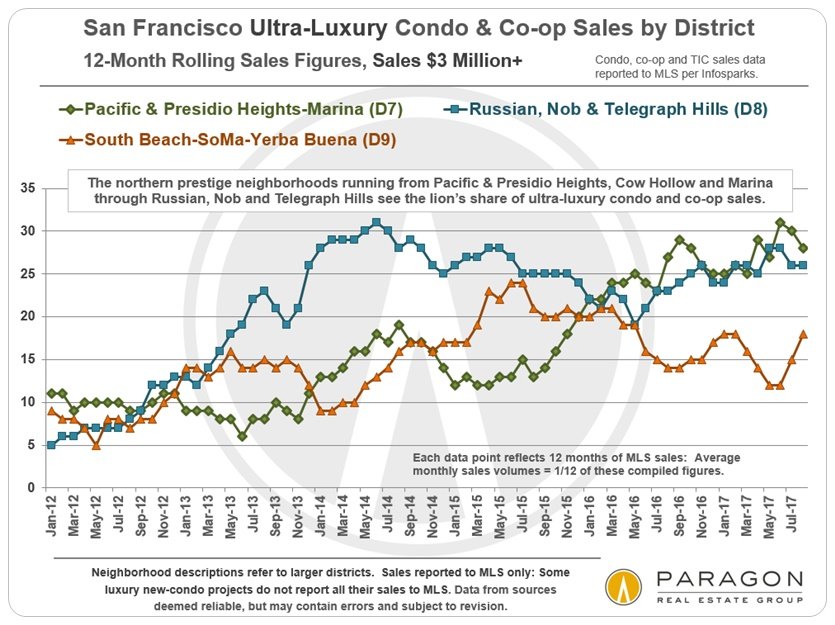 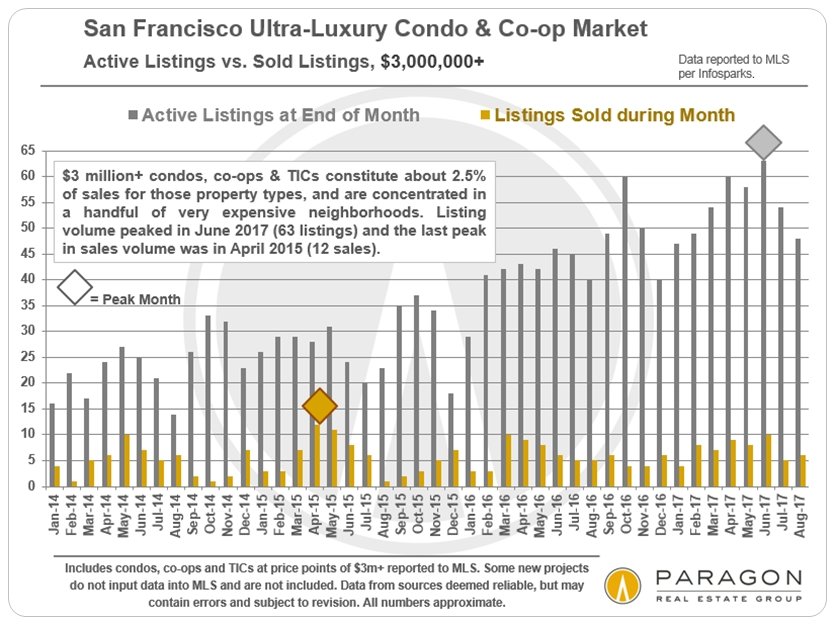 Please let us know if you have questions or we can be of assistance in any other way.