As Buyers Compete for an Inadequate Supply of Home Listings,
San Francisco Median House Sales Price Soars to $1,500,000 in May 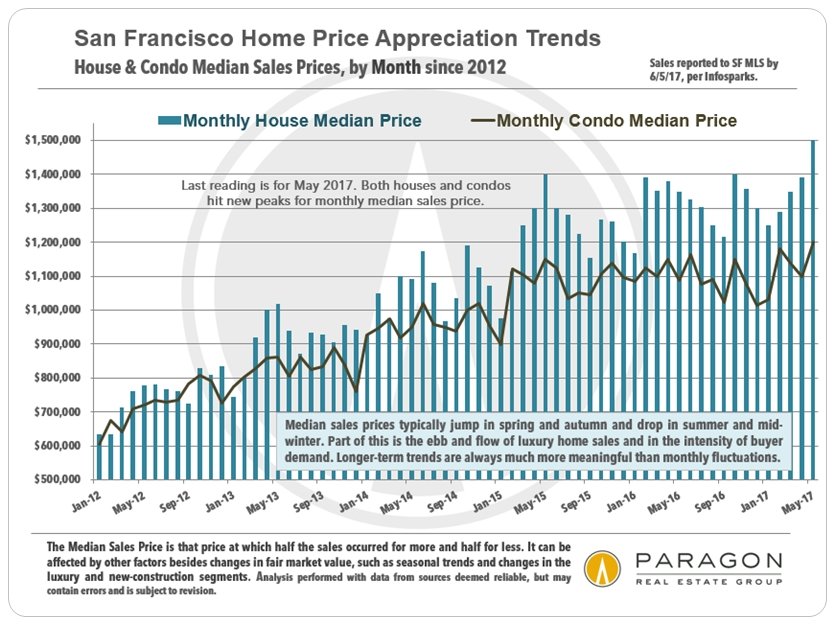 We are not that enthusiastic about using monthly median prices, because San Francisco does not have that many sales in any given month (400-550), divided among 4 property types in 70-odd neighborhoods with different values. Monthly data can also be affected by short-term events, such as bad weather, a spike in interest rates, a new-condo project closing many sales, or a sudden political or economic event. All those factors mean that monthly prices can fluctuate dramatically without great meaningfulness as to changes in fair market value.

However, that being said, the spring market 2017 definitely became feverish and in May, the SF median house sales price jumped to $1,500,000, its highest point ever, about $100,000 (7%) above its previous monthly peak. The SF median condo sales price also hit a new peak at $1,200,000, $20,000 (1.7%) above its previous high. Note that it is not unusual for median sales price to spike in spring and then decline thereafter as the market starts to cool for summer (i.e. spring median prices do not immediately become the new normal). Other counties around the Bay Area also hit new peak median house sales prices in either April or May: $1.49m in San Mateo, $1.35m in Marin, $1.28m in Diablo Valley/Lamorinda, and $875,000 in Alameda. 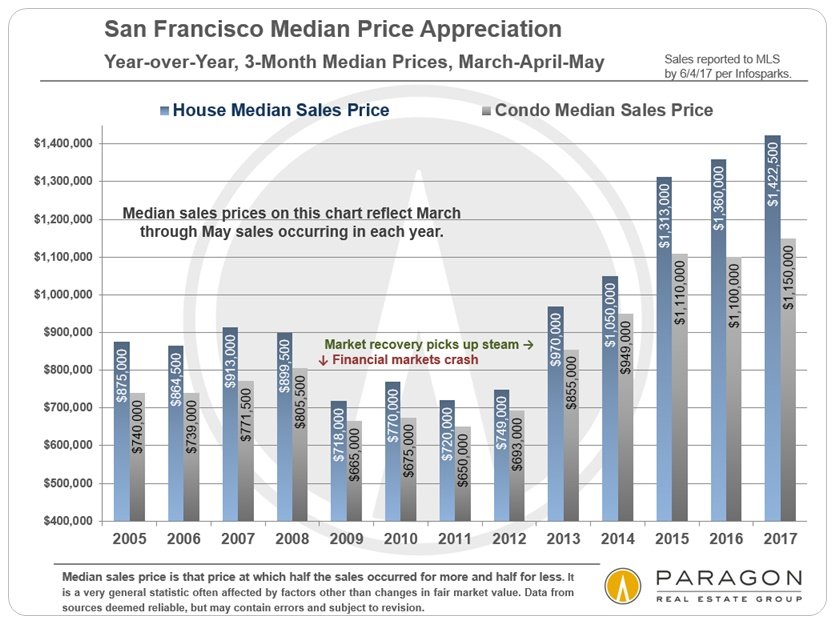 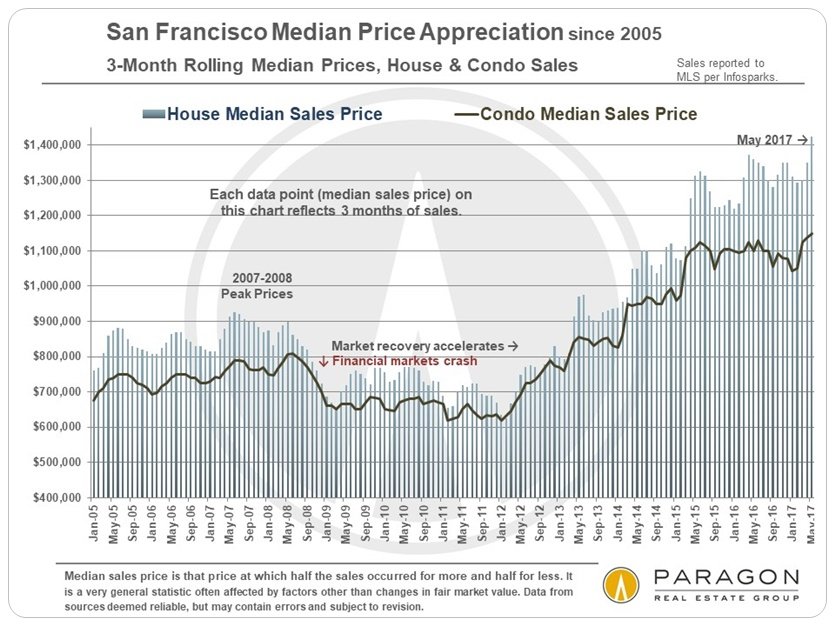 In both this chart and the one above it, one sees the plateauing of condo median prices in 2015-2016. The condo market cooled much more than the house market in 2016, mostly due to an influx of new construction condos coming on market just as high-tech hiring slowed.

Comparing Us and Them 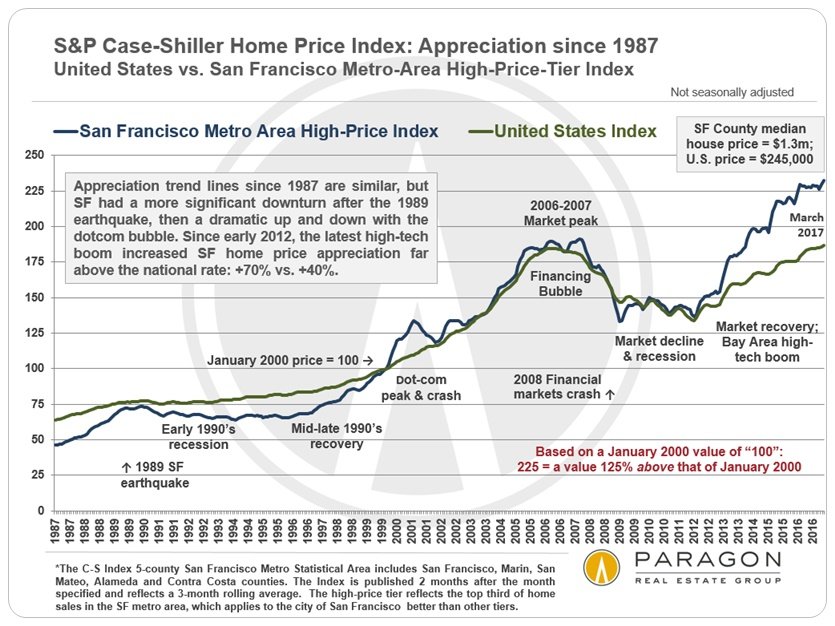 This chart compares the S&P Case-Shiller Home Price Indices for the 5-county San Francisco Metro Area high-price-tier market (which reflects the city of San Francisco best) in the blue line and the United States market in the green line. It goes through March 2017, which is the last report Case-Shiller has released as of early June, so it will not reflect the appreciation of April and May.

The appreciation trend lines are really quite similar except for 3 periods: Right after the 1989 earthquake, the rise and crash of the dotcom bubble, and the recent high-tech boom in the Bay Area. Looking beyond the difference in appreciation rates since 2012, 70% vs. 40%, the difference in dollar appreciation in median house prices over the 5 years is enormous: over $500,000 for SF vs. $70,000 for the U.S.

Note on the chart that after a divergence, it is not unusual for the trend lines to converge once again.

The house market is hotter than the condo market, and the more affordable house market (affordable by San Francisco standards) has turned into a feeding frenzy this spring. By the measure of overbidding, the Sunset, Parkside and Golden Gate Heights district remains the hottest the city, as it was when we last measured in October 2016. These are stupendous median percentages over house asking prices. In the condo, co-op and TIC market, overbidding is at lower percentages, generally running in the 5-11% range, but going as low as 0% in the South Beach/SoMa district with its big influx of new construction inventory. 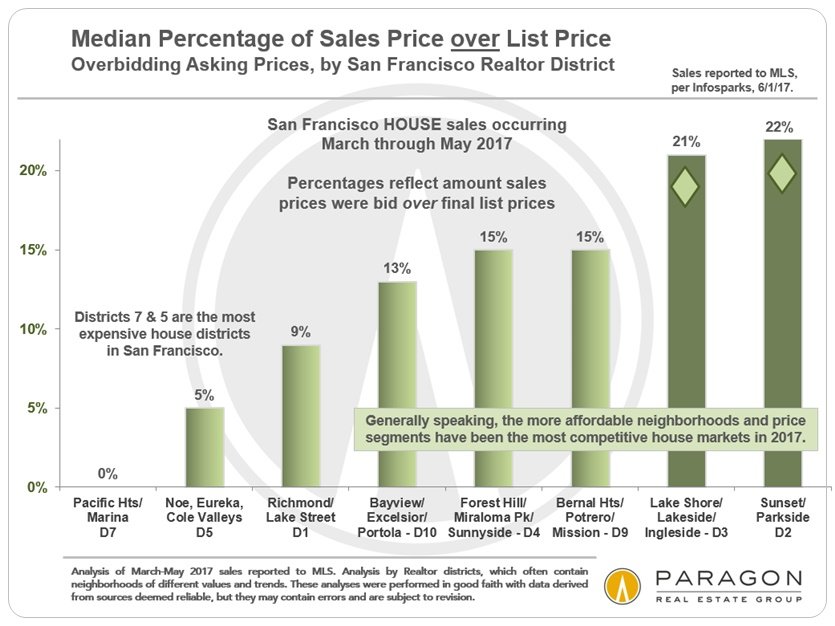 In each of the following charts, there are distinct changes reflecting 1) the market recession after the 2007 peak, 2) the 2012-2015 recovery, 3) some cooling in the market in 2016, and 4) the market heating up again in spring 2017. Note the differences in some of the trends lines between the house and condo market. San Francisco is the only county in the Bay Area where the market is dominated by condo listings: Thousands of new condos have been built since 2000 with many more in planning.

New Listings: The decline in the frequency of owners putting their homes on the market has played a critical role in pressurizing the markets in SF and, indeed, around the country. 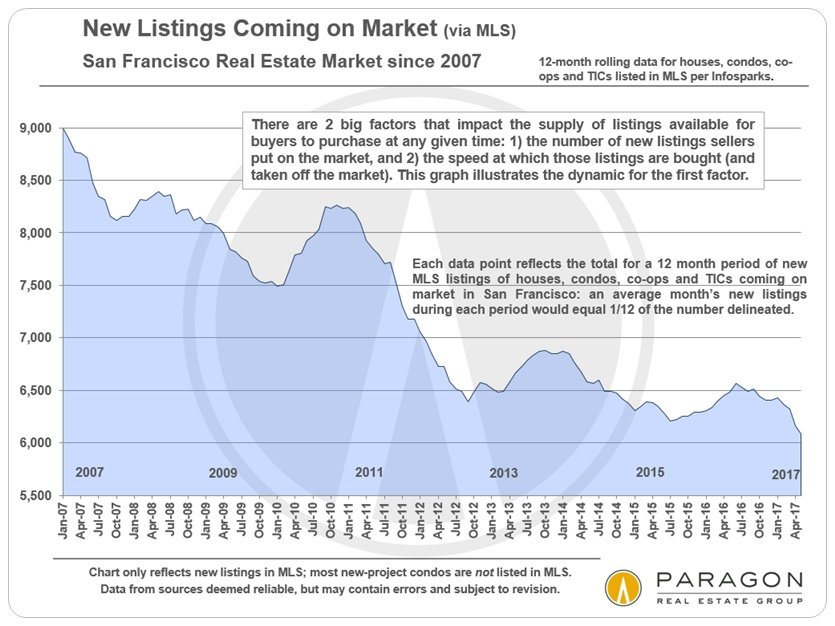 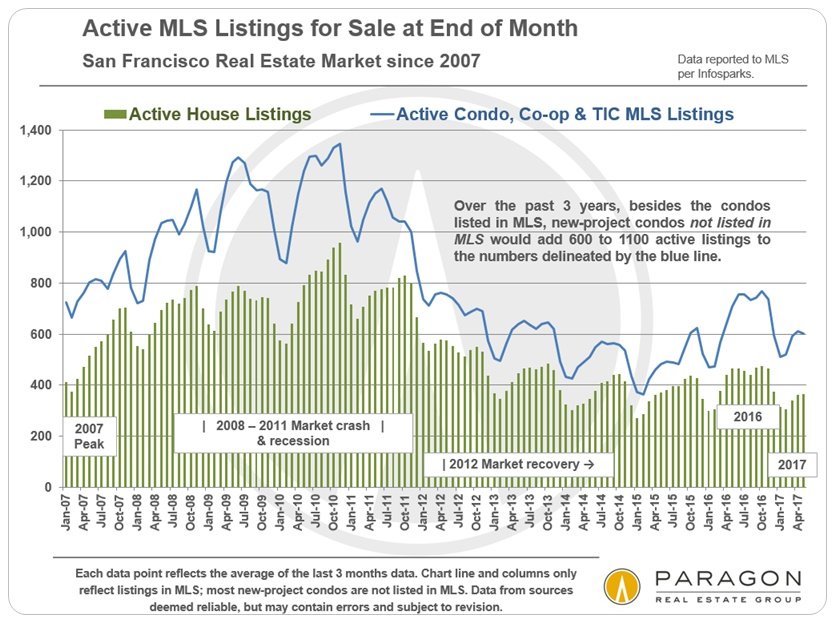 Months Supply of Inventory (MSI) measures the interplay of supply and demand: The lower the MSI, the stronger the buyer demand as compared to the supply of listings available to purchase. 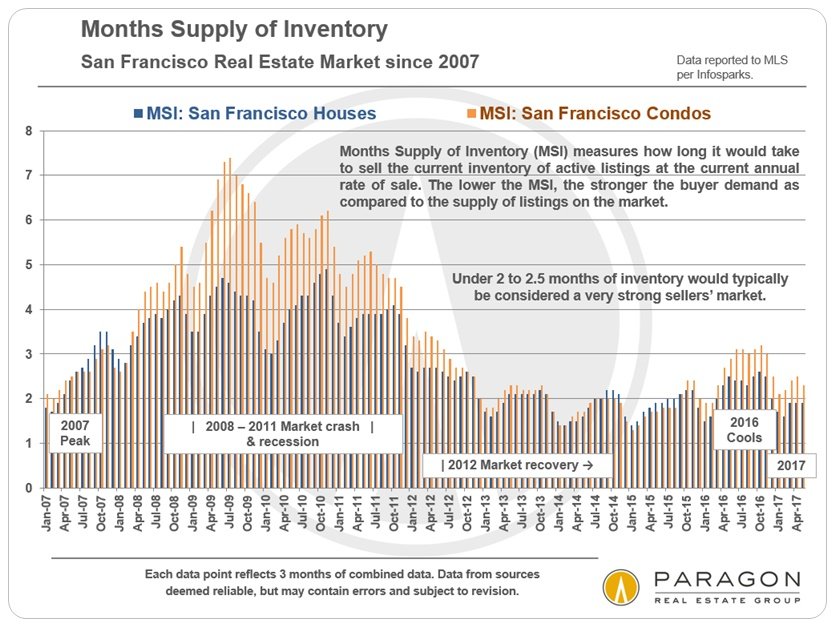 Average Days on Market: When demand increases, especially against a declining inventory, competitiveness between buyers increases and, typically, average days on market decline. 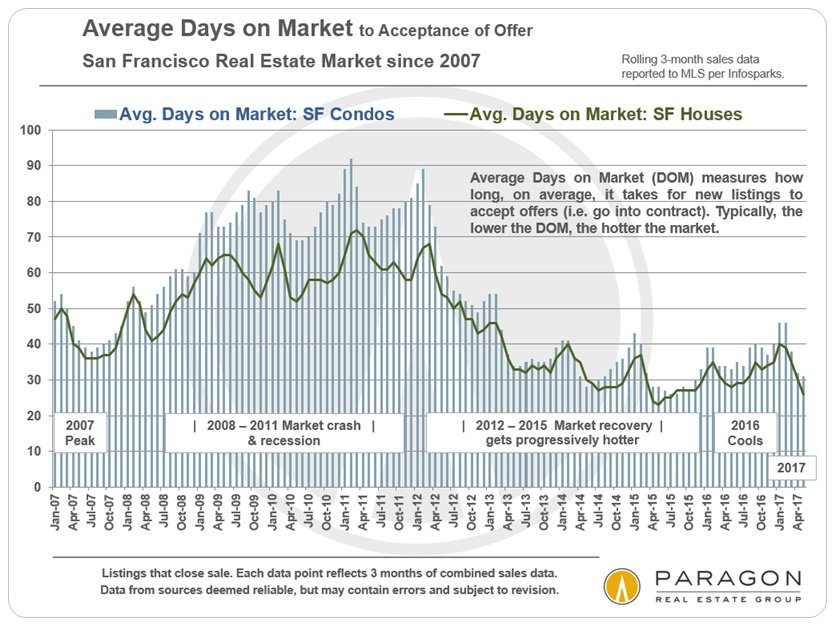 Here are 7 charts from the more than 20 new analyses we have posted to our luxury report, which can be found in its entirety here: San Francisco Luxury Home Market

The luxury home market in the city has mostly bounced back from the cooling it experienced late-2015 through 2016, but, generally speaking, is still not quite as strong as it was in spring 2015. The first chart below breaks out luxury home sales by dollar per square foot values. The 3 MLS sales for over $3000 per square foot in the past year were all in the new Pacific Heights luxury condo project, The Pacific. 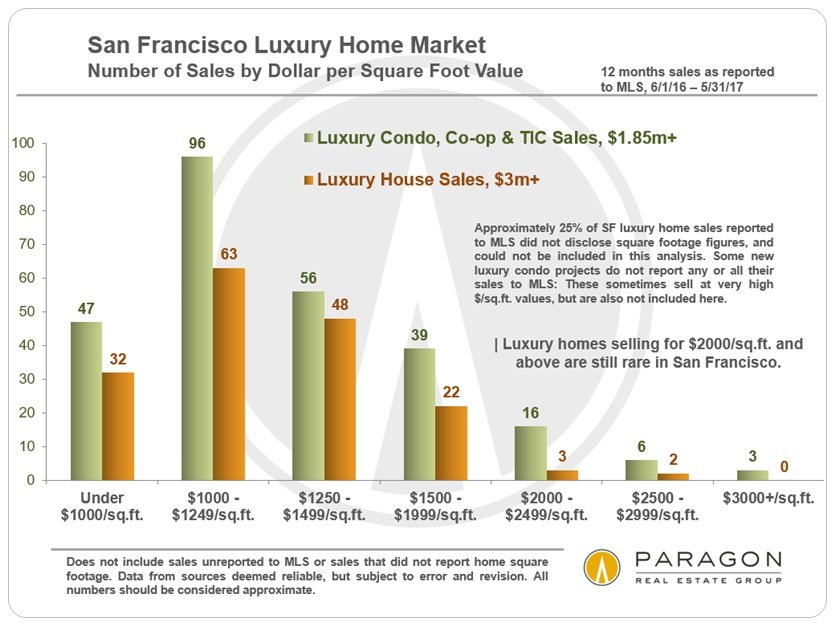 House sales of $3m+ are concentrated mostly in 2 districts: The $3m to $5m market is dominated by the greater Noe, Eureka & Cole Valleys district; the $5m+ market is dominated by the Pacific & Presidio Heights, Cow Hollow and Marina district. On a dollar per square foot basis, the best values are in the St. Francis Wood/Forest Hill area, an area of large, gracious houses on larger than usual lots. 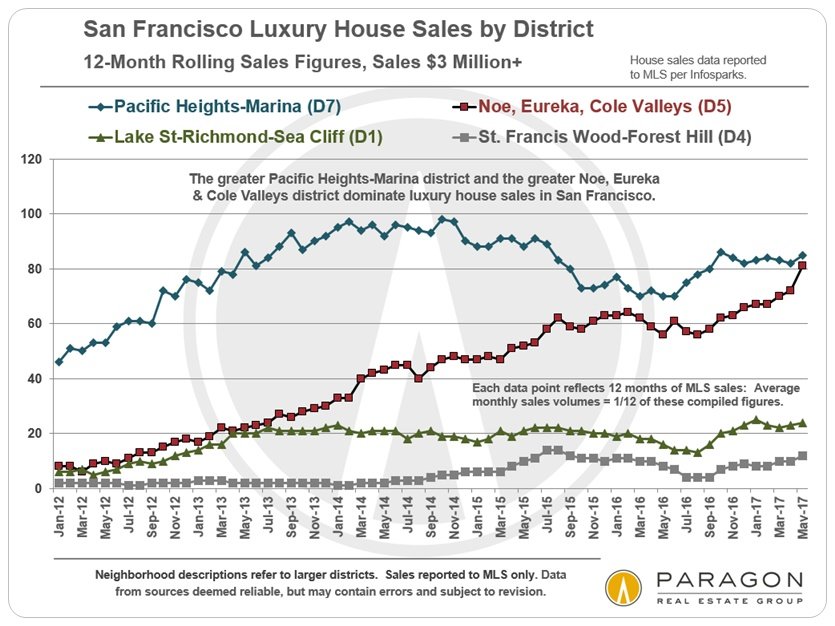 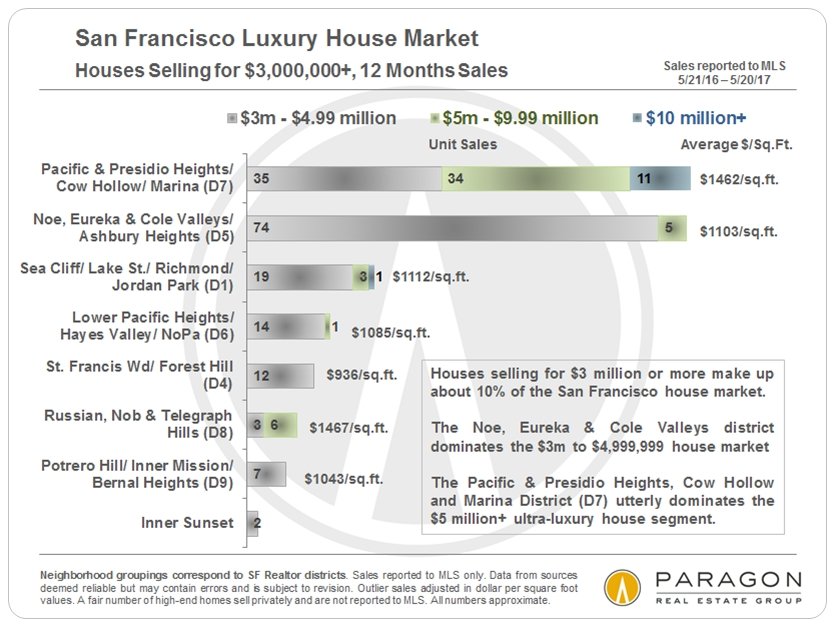 The majority of luxury houses in San Francisco were built before 1920; the great majority before 1940. 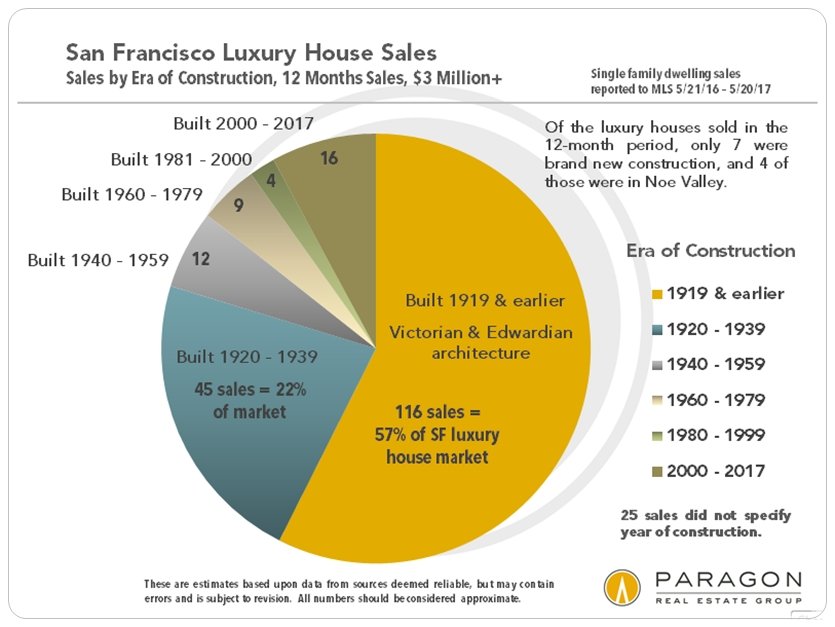 May 2017 saw the second highest monthly number of luxury condo sales ever, just below the number of sales in March 2015.

The biggest change in the luxury home market has been the dramatic drop, almost 50% year over year, in luxury condo sales reported to MLS in the greater South Beach/ SoMa/ Yerba Buena district, even as listing inventory there has hit new highs. This is the area where large, very expensive, high-rise projects continue to come on market, and, to some degree, they may be cannibalizing MLS sales in the resale market. Foreign buyers have played a significant role here in recent years and it is possible (we do not have hard data) that this demand has declined due to political issues here and in China. This is also where the unfortunate issues at the Millennium Tower (slight sinking and tilting; multiple lawsuits) are being extensively reported upon. Even though the construction issues at the Millennium are unique to itself, it may be that the storm of negative publicity is making affluent buyers more cautious about buying in the surrounding area. If so, that effect will presumably wear off in time, which may make this a good time to buy while inventory is high.

For the time being, the luxury condo market has shifted its center back to older, northern, highly affluent neighborhoods like Pacific Heights and Russian Hill. 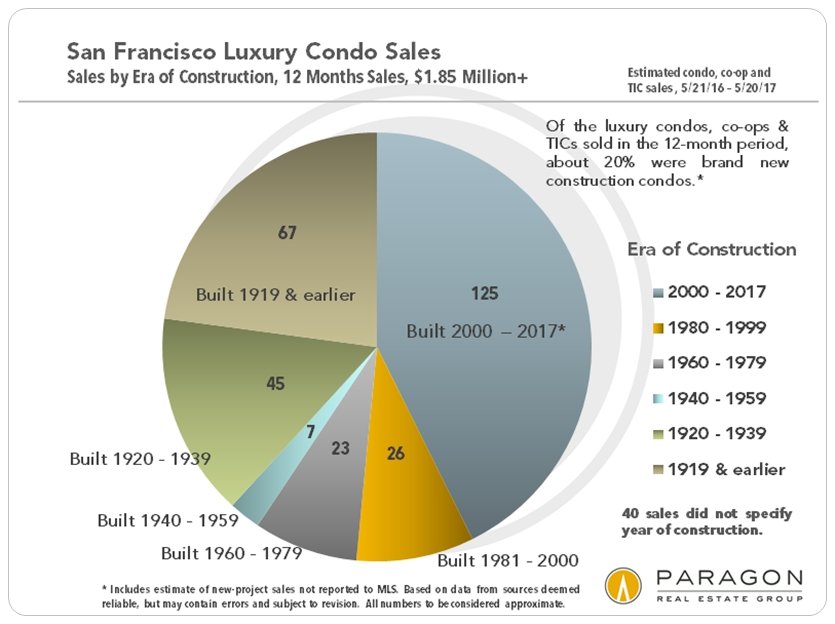 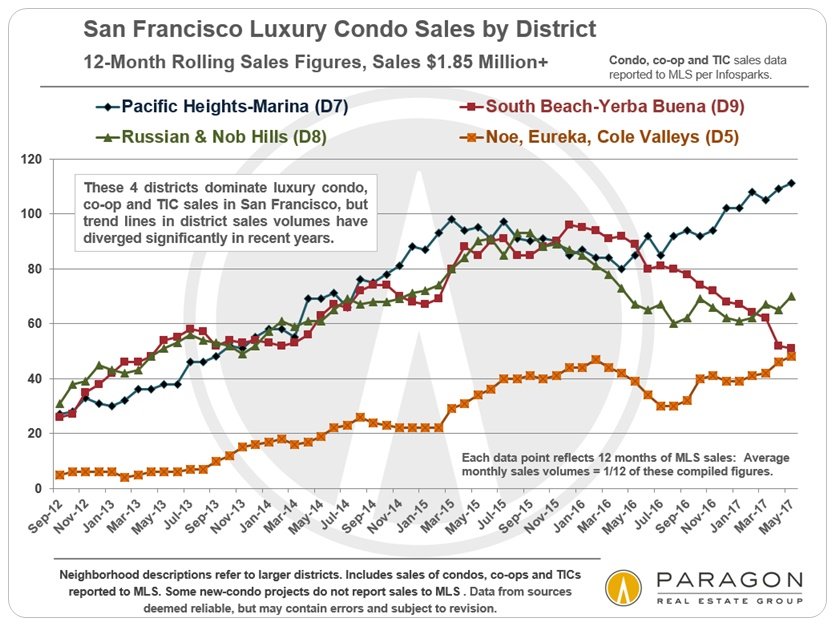 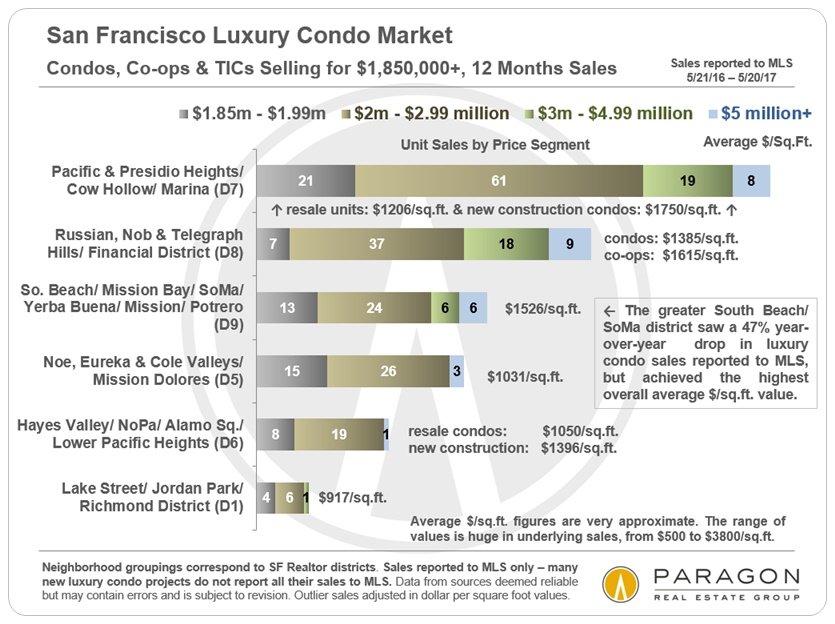 Socketsite.com and the San Francisco Business Times performed excellent analyses recently of the state and pipeline of new housing construction in San Francisco, which we have illustrated in the two charts below. (Unfortunately, the annual Planning Department Housing Inventory Report, which usually comes out in May or June, has been delayed, probably until August or later.) 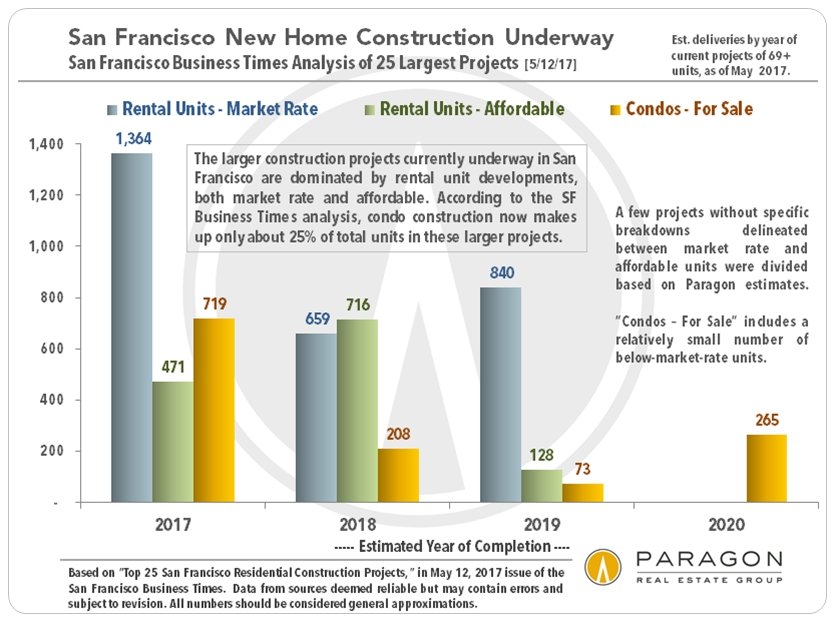 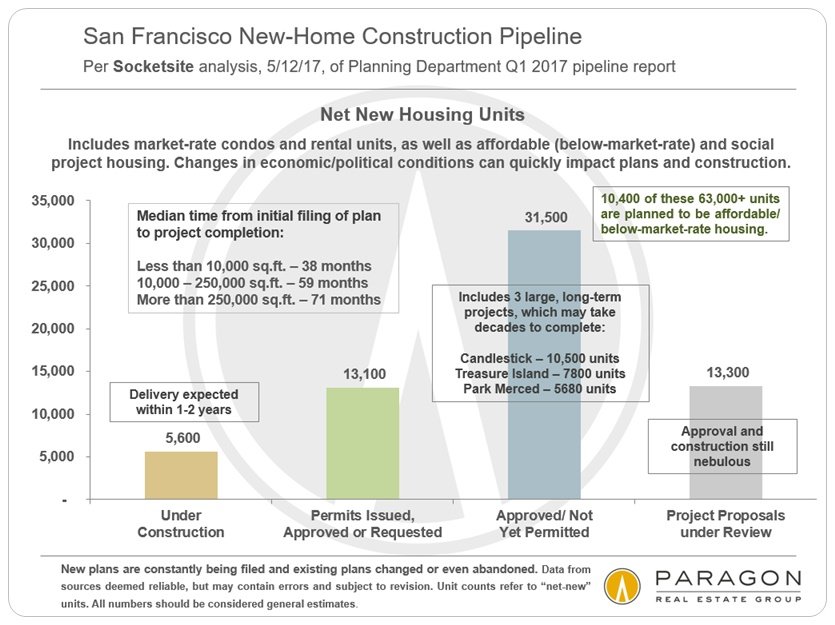