The SF Planning Department just released updated Q4 2015 information regarding the new-housing development pipeline. San Francisco is in the midst of one of its biggest new-housing construction booms in history. (The same is occurring on the commercial development side, but this report wonâ€™t deal with that.) Indeed, it often seems that new projects of one kind or another are being announced on an almost daily basis, and a detailed map delineating all projects in some stage of the pipeline makes many city districts appear to have measles. 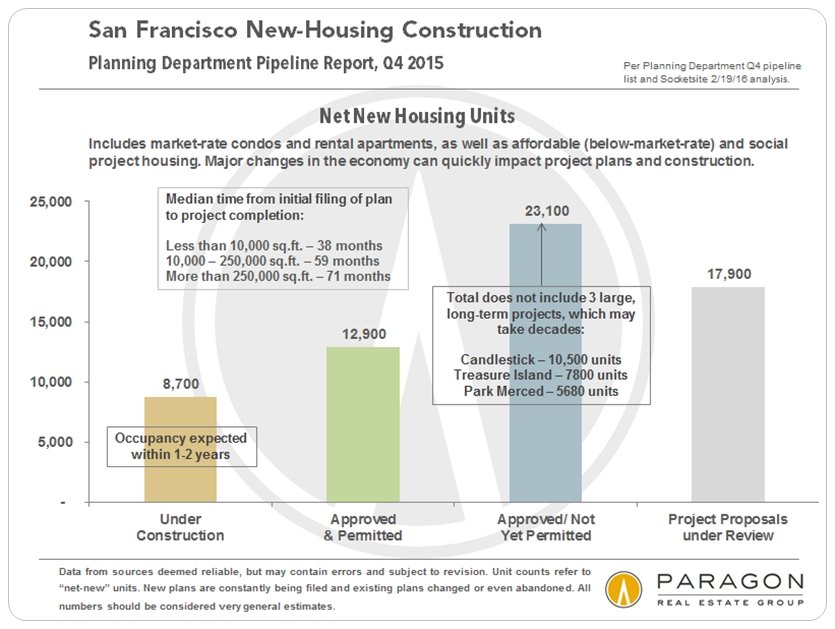 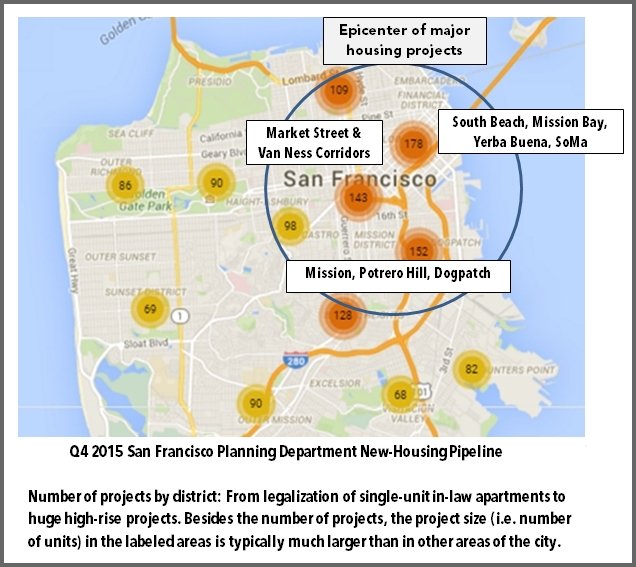 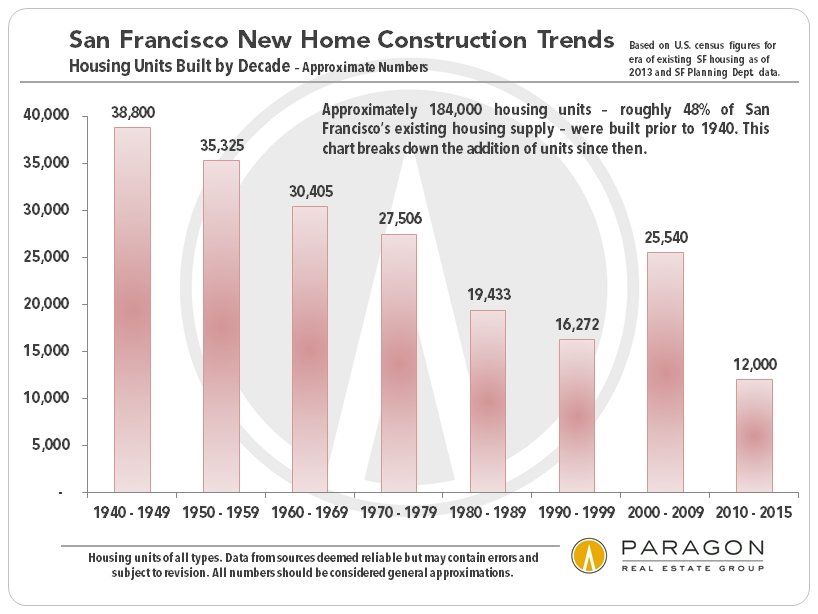 New housing construction has lagged population pressures for decades â€“ pressures which have soared during the current economic and employment boom â€“ and now there is a scramble to address the inadequacy of housing supply, and, for developers/investors, to reap the rewards of a high demand/low supply dynamic in one of the most affluent and expensive housing markets in the world. Of course, one of the questions now is at what point might new inventory succeed in fully meeting market-rate buyer and renter demand, and possibly proceed to an over-saturation point, thus significantly changing the supply and demand dynamic. Such a change, if it arrives, would certainly affect rent and price appreciation rates.

As of December 30th, there were approximately 62,000 housing units of all kinds â€“ luxury condos, rental apartments, market rate and affordable units, and social project housing â€“ in the relatively near-term pipeline (next 1 to 6 years). Most are in the Market Street corridor area, the Van Ness corridor above Market Street, and in the districts to the southeast of Market Street (see map). If we add the mega-projects planned for Candlestick-Hunterâ€™s Point, Treasure Island and Park Merced, which may take decades to become a reality, the number jumps to well over 80,000. As a point of context, there are approximately 382,000 residential units in San Francisco currently. About 3500 new units were added in 2014. (We are awaiting the city’s 2015 Housing Inventory Report for the 2015 figure, but it will probably be of similar scale.)

Housing supply and affordability issues, strong feelings about neighborhood gentrification and tenantsâ€™ rights, and even simple NIMBYism (or in SF, NBMVism, â€œnot blocking my view!â€) make development the most contentious political topic in San Francisco. Furious battles are ongoing in the Board of Supervisors, the Mayorâ€™s office and the Planning Department; with neighborhood associations and special interest groups; and at the ballot box. Development is not for the faint of heart or shallow of pocket: One cannot contemplate building virtually anything in the city without vehement opposition and sometimes a well-funded coalition in opposition. For developers, the equation to be calculated out includes very high land and construction costs, increasing affordable-housing contributions required by the city, enormous hassle-factor and extended project timelines on one side, and the potential for financial returns on the other. In new San Francisco developments, condos often sell for $1250 per square foot and above, but we are hearing from people on the development side that they can no longer pencil out building new housing in the city in a way that makes financial sense. They believe that many of the projects in the pipeline probably will not actually be built, and thus the Â numbers quoted above are greatly overstated.

Of the units in the greater pipeline of 80,000 units, over 9000 units are designated as â€œaffordable housingâ€ â€“ but many of those are in the long-term Candlestick-Hunterâ€™s Point and Treasure Island projects. Because of the nature of the political environment, much to do with how much affordable housing will be built is in flux. Many developers are in intense negotiations with government agencies and neighborhood associations to find a workable compromise between return on investment on one hand, and unit mix and affordable housing requirements on the other. Said requirements may consist of a percentage of units in the project, building affordable units elsewhere in the city, or contributing substantial amounts to the cityâ€™s affordable housing fund in lieu of building.

In early March 2016, the San Francisco Board of Supervisors voted to put a city charter amendment on the June ballot, which, if passed, would hugely increase the affordable-housing contributions (in money or in affordable units built) required of developers of projects of 25+ units. Obviously, this would affect the financial equation for builders in the city. The question is will it affect their motivation to build so much as to significantly impact new home construction (market rate and affordable) in San Francisco. If you are interested, the city’s chief economist, Ted Egan, wrote a detailed report on the issue: Economic Impact Report

New housing construction is very sensitive to major economic, political and even environmental events (i.e. natural disasters), so simply because something is in the pipeline doesnâ€™t mean it will be completed as planned within the time frame contemplated. First of all, plans are constantly being changed just in the normal course of things. And if a big financial or real estate market correction (or crash) occurs, as happened in late 2008, projects in process can come to a grinding halt, and new projects substantially altered, delayed or abandoned. Because the timeline in San Francisco can run 3 to 6+ years from initial filing with Planning to construction completion, developers and their lenders make enormous financial bets on what the future will look like. Timing is everything in real estate development, and can make the difference between large profits and bankruptcy. When the music stops â€“ which it always does sooner or later, though the time range of opportunity can vary greatly â€“ not everyone will find a chair to sit down in. That especially applies to those who over-leveraged their projects.

As a side note, big Chinese developers have been investing in both large residential and commercial real estate development projects in the Bay Area, and, according to reports, continue to aggressively seek additional opportunities. Though significant â€“ constituting billions of dollars in investment â€“ these projects do not constitute the greater part of Bay Area development.

Other reports you might find interesting can be found here:

These analyses were made in good faith with data from sources deemed reliable, but they may contain errors and are subject to revision. Statistics are generalities and all numbers should be considered approximate.