If you wish, you may jump straight to the market charts.

The SF real estate market is stuck. Stuck in high gear: huge buyer demand + the lowest interest rates in history + extremely low inventory of listings = (often ferocious) competitive bidding and increasing prices. Though this trend began in the city’s more affluent areas, it has now spread to virtually every neighborhood, property type and price segment. Since closed sales activity follows the time of offer acceptance by 4 to 8 weeks, the appreciation in home values has not yet shown up in the statistics for certain neighborhoods. We believe it will soon.

Though this situation is to the advantage of sellers (after years of market doldrums), homebuyers might take some consolation in the fact that the last time the market dramatically shifted after a similar downturn, in 1996 after the early nineties recession, there was a market frenzy much like ours today. However, people who bought at that time still ended up doing very well by getting in at the beginning of a market rebound that went on for many years, even before the housing-bubble years began. And interest rates then were close to double today’s.

When reviewing the map analyses below, remember that median and average statistics are generalities, and how they apply to any specific property is unknown. Percentage changes should be taken with a grain of salt: some neighborhoods have relatively small numbers of sales, which make statistics less reliable; in other areas, it may simply be that the size/quality mix of homes sold shifted from one period to the other — this happens. Still, overall, it is clear that the city is experiencing a general surge in home values.

Explanations for the statistics referenced can be found on the Paragon website: Statistical Definitions 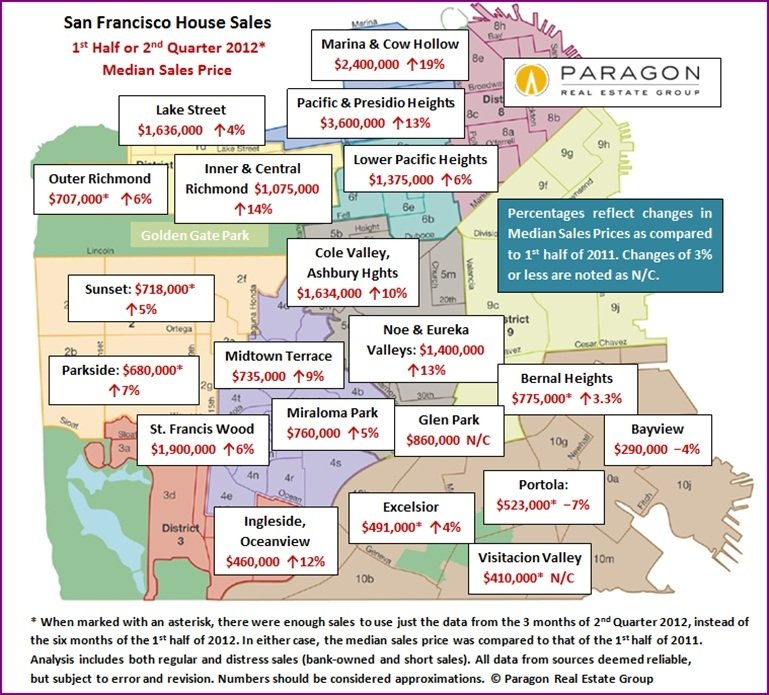 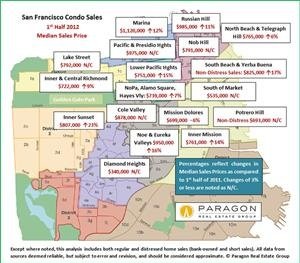 Median Condo Prices and Appreciation
Many neighborhoods are showing significant increases in the condo median sales price, and this appears to be accelerating. (However, as an example of how statistics are not 100% reliable, the chart shows no appreciation for Pacific and Presidio Heights condos over the past year: we believe there was indeed significant appreciation on par with most other nearby affluent areas, but the statistic is reflecting other factors, such as different inventories for sale during the two periods being compared.) 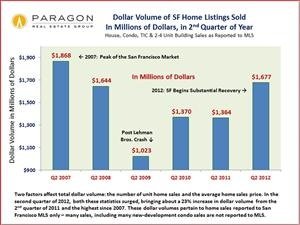 San Francisco Dollar Volume Sales
Two factors affect dollar volume: the number of sales and the average sales price. In 2012 both of these statistics have been jumping in the city.

SF Unit Home Sales
The number of sales reported to MLS has jumped to its highest number in over 4 years. However, there are two additional factors: new-development condo sales which are often not reported to MLS are lower than in many previous years due to the crash in building after 2008 (though this is turning around too). On the other hand, it appears that the number of “off-market” sales, not listed in or reported to MLS, has surged in 2012. 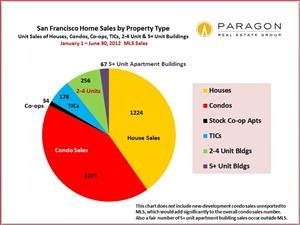 Home Sales by Property Type
Houses and condos make up the great majority of sales in San Francisco, though TIC sales seem to be making a big recovery in the low-inventory situation the city has found itself in. 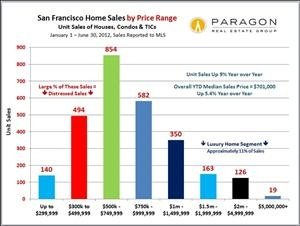 Home Sales by Price Range
As the market has heated up, prices have risen and distressed home listings have plunged. This is causing something of a shift upward in the percentage of sales in the higher price segments. 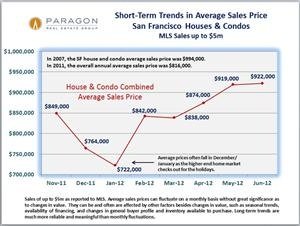 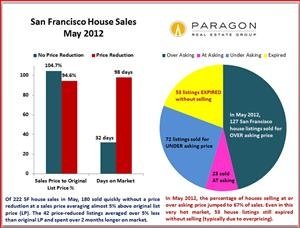 Price Reductions, Sales Price to List Price Percentage & Days on Market
Houses selling without a price reduction are growing as a percentage of sales. They are averaging well over the asking price and selling in the shortest time period in years. 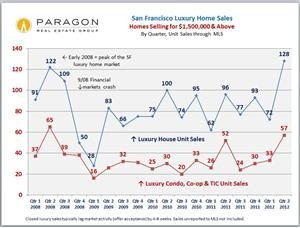 SF Luxury Home Sales
Homes selling for over $1,500,000 hit their highest level in years in the second quarter of 2012. 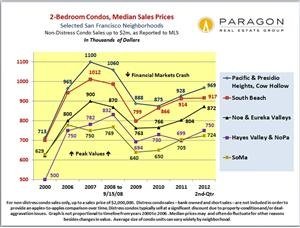 2-Bedroom Condo Prices: Long-Term Trends
These neighborhoods have all been showing significant price appreciation since the home-price crash in 2008-2009. If this chart went back to 1995, it would show that median prices pretty much doubled between 1995 and 2000. 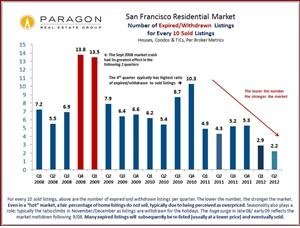 Expired and Withdrawn Listings
As the market gets hotter, fewer listings expire without selling. Right now,the percentage of expired and withdrawn listings is incredibly low.

Percentage of Listings Accepting Offers
The stronger the buyer demand and the lower the inventory, the higher the percentage of listings accepting offers. Every San Francisco property type is at its highest percentage in many years, and perhaps its highest ever.